The Flight of Gaudi

The second part of a series of canvases exploring beauty, religion, iconography and globalisation.
The starting point being an instagram post by Gigi Hadid a model and contemporary icon.
The subject matter here is the flight of Gaudi’s soul after a fatal accident.

Gaudi died after being struck by a tram on his way to church, he collapsed on the street and was assumed to be a beggar as he carried no identity on him and was dressed in shabby simple clothing.

I wanted to sketch this canvas and let the medium run and fade to try and capture the darkness of the gothic quarters back streets of Barcelona. It is actually a street I sketched in Shoreditch merged with a street in Barcelona. The soul of Gaudi takes flight out of the darkness. The Angel is the eye of Gigi being carried by the Victoria Secret Wings, in the background the finished Sagrada Familia towers over the scene.
The scale of the Sagrada Familia construction is breathtaking and is a fitting resting place for The Catalan Artist. 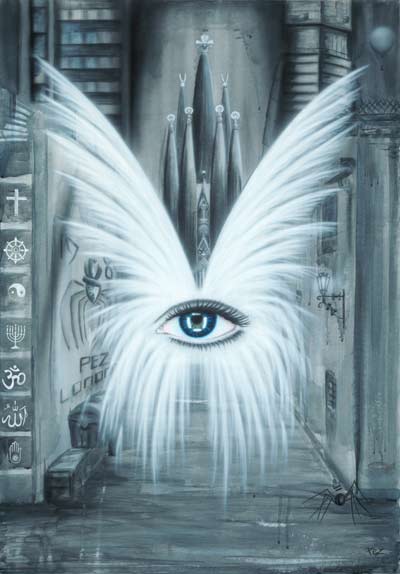 The Flight of Gaudi